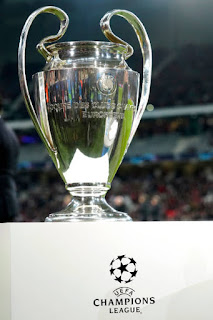 The quality and beauty of football inherent in the UEFA Champions League cannot be over looked or ignored, over the years football fans all over the world have always enjoyed watching and witnessing the drama of the Champions League.

With the quality of teams and players in the League, combined with the classic and very technical coaches, plus the year to year comeback drama written all around the history of the UEFA Champions League, it is always difficult to predict who goes home with the trophy. Lets take a look at the four strong contenders that are likely to go home with the trophy.

1. Bayern Munich: This team may not be in the list of your favorites, but they have potentials contained in their line-ups coupled with Lawandoski on fire. Bayern as a team is very organized on their front line, and they have shown the world how good they are in there recent Champions League outing, including defeating Barcelona by three goals to nil. So, they are number one(1) on my list.

2. Liverpool: Liverpool FC have had a great display in their last Champions League match against Barcelona, and yes they are still a force to reckon with as long as this season’s Champions League tournament is concerned. The Reds are still unbeaten in the EPL(English Premier League), they also have an edge over their contenders in the EPL table. They are my second Favorite.

3. Barcelona FC: The Spanish giants may not be in their best football form at the moment, especially with somany injuries hitting the club, but they cannot be ruled out completely. They have the back up and influence of the best players in the world like: Dembele, Cotinho, who are currently injured plus other good play makers like; De Jong, Fati etc. They may make it to the promised land.

4. Manchester City: Pep Guardiola maybe at it again, especially judging from the last outing against RB Lipzig which saw them record an outstanding 6-3 win against the German side. Pep’s wealth of experience can earn Manchester City the Champions League trophy. If they can continue with their current performance and form, they may end up becoming the king of Europe this season.

Do you agree with my list?
What is your take?