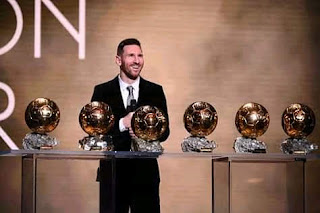 The Camp Nou little magician has become the first player in the history of football to win a 6th Ballon D’or, having possessed an extremely amazing record 2019, he was honoured will a 6th golden ball.

Lionel Messi won his first golden ball in 2009, and for the pass eleven conservative football seasons has remained consistent with his performance, maintaining a record of at least 41 goals each year. In 2012 the Argentina scored a record breaking 91 goals in a calendar year, and in the same year won his 4th Ballon D’or, up till date Messi retains the record of being the only football player to have won four Ballon D’or awards conservatively.

A few months ago Lionel Messi also received a couple of awards like the UEFA best forward, FIFA best player etc. The Barcelona play maker really had a wonderful football season with about 51 goals, and a reasonable number of magical assist with a Laliga trophy to match, even though Barcelona lost a champions league semi-final to Liverpool in Anafield and a defeat to Valencia in the Copa del Ray final.

It is on record that Lionel Messi reaffirmed his Ballon D’or supremacy by winning a 6th golden ball, topping his all time football rivalry Christiano Ronaldo who currently has five golden balls. The Argentina top player is in no doubt the greatest footballer to play the game of football. Lionel Messi is football.