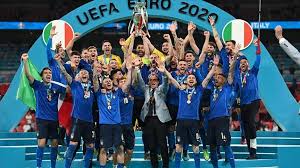 The head coach of the Italian national team believes that Italy can win the 2022 world cup tournament which will be held in Qatar. Even though Italy finished second in Group C following a nil-nil draw with Northern Ireland, Mancini’s hope in the strength of his boys remains unshakable.

The Euro 2020 winners will have no other option than to find their way to the 2022 world cup through play-offs. This is simply because they had failed to take first place in their qualification group. Yet, the Italian head coach believes that Italy remains one of the strong contenders for the 2022 world cup, and he is certain they have a good chance to qualify.

Here is what Mancini has to say;

“We can’t do anything about it now, we have this game in March and will try to give our best,” Mancini told RAI Sport, referring to the playoffs.

“At the moment, we are struggling to score goals, despite dominating possession and the initiative. Northern Ireland put everyone in defense and we struggle to break sides like that down.

“It’s a pity because we should’ve sealed the group long before it came to this. We just need to rediscover what characterized us up until today. We had two missed penalties in the decisive matches, so that shows we had the chances to win.”

“Now we prepare for March and we go into the play-offs confident. We’ll book our place in the World Cup in March and hopefully win the tournament too.”

The Italian national team will have to secure their spot in the upcoming World Cup tournament through the play-offs, and these play-offs will be taking place in March 2022.

The play-off competition will have 10 runner-up teams in it, combined with the two best group winners from 2020-21 UEFA Nations League who have not qualified and are yet to enter the play-offs. In the end, only three nations will qualify from the play-offs to be part of the tournament in Qatar.

The Italian national team seems to have lost that touch of magic in their attacking half. We all witnessed them demolish a lot of European teams in the Euro Tournament. They look very complete, compatible, and ready to take on strong competitors.

If the Azzurri fail to qualify in the play-offs in March next year, then it will be the first time they have failed to qualify for the World Cup tournament in eight years.