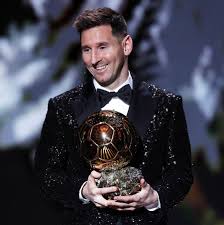 In 2021, Lionel Messi won what is widely believed to be his first international trophy with the Argentina national team, broke Pele’s record of the highest goal scorer in the history of South-American football, won Copa Del Rey, Won Copa America, and almost succeeded in dragging a dying Barcelona team to La-Liga victory. Yet, a lot of football lovers in their opinion think that Lionel Messi does not deserve the 2021 Ballon D’or award. Be that as it may, in this sports article, we want to take a close look at Lionel Messi’s 2021 statistics, and enumerate clear reasons why he deserves the 2021 Ballon D’or award.

Before we continue, it is essential to state very clearly that the Ballon D’or is heavily influenced by individual brilliance. This implies that even if a certain player wins all the trophies in the world in a single football season, but had very negligible influence in the collective efforts of his team at both national and club level as the case may be, the chances of that player winning the Ballon D’or becomes very slim. On the other hand, if another player with fewer trophies in a football season exacts a commendable level of individual influence on his team, he stands a better chance of winning having contributed more in goals, assists, big chances created, and other essential football metrics needed for the success of a team.

Again, international trophies and international tournaments are bigger than club football or club competition. International tournaments like World Cup, Afcon Cup, Euro, Copa America, Confederation Cup e.t.c is usually a competition between different countries of the world. In national teams, you have a coming together of the best legs selected from club football to represent their countries after series of drills and training. However good a player may be at club level, he may not be selected to represent his county if another player is discovered to be slightly better than him in the position he plays.

So, it is no coincidence that inter-country competitions are bigger than club competitions. This explains why a certain Ronaldo won the Ballon D’or after winning the world cup with Brazil in 2002 against a teammate, Zidane, who won only the Champions League trophy. Perhaps, this also explains why Modric won the Ballon D’or in 2018 after inspiring Croatia to a World Cup final in France. Hence, players must perform well during international tournaments. Below are Lionel Messi’s 2021 statistics which gave him more votes and subsequently qualified him winner of 2021 Ballon D’or.

In the last few years, especially since 2014, a lot of football analysts have always described Argentina’s national team as a failure. This was because of the numerous finals they’ve played without winning a single trophy. They lost the 2014 World Cup final in Brazil and subsequently three Copa America finals, two against Chile and one against Brazil in 2016. Considering the quality of Argentina’s national team, one would expect that with the likes of Dybala, Aguero, Angel Di Maria, and of course the exceptional Lionel Messi, Argentina would have won all those finals, yet this wasn’t the case.

The 2020 Copa America tournament started and not many people expected to see Argentina go home with the trophy. However, it was more of a Lionel Messi’s tournament with his teammates backing him up in other departments of their team. Lionel Messi gave an incredible nine-goal contribution to the success of Argentina’s Copa America tournament. So, out of the 13 goals Argentina scored in the tournament, Messi scored 4 goals and gave 5 assists, two of his goals were outstanding free kicks. One of these free kicks came in their opening game against Chile and the other was in their quarter-final against Ecuador.

Argentina’s Copa America success began with a draw against Chile of which the only goal Argentina scored in that match was scored by Messi, and it ended 1-1. They went on to beat Paraguay and Bolivia by 1-0 and 4-1 respectively to qualify for the quarter-finals as leaders of their group. They also went further to crush Ecuador 3-0 in the quarter-finals, went past Colombia in the Semi-finals through Penalty kicks, and defeated their arch-rivals, Brazil, in the final, thanks to Angel Di Maria’s outstanding goal which secured the title for them. Below are Lionel Messi’s Copa America statistics.

Despite Barcelona’s last year’s La-Liga under-performances, we witness Lionel Messi pushing them to what would have been a La-Liga triumph at the end of the season if they hadn’t lost some points when the season began. Early last season, Lionel Messi was injured, during his absence, Barcelona lost a lot of points and this made winning the La-Liga almost impossible for them.

In the total absence of Lionel Messi this season, we can now see what has become of Barcelona and how they crashed out of the Champions League in a group having Bayern Munich and two middle-classed European teams. Everyone in the world of football now appreciates what Lionel Messi has been doing for Barcelona all these years. The goals, leadership, and assists he provided to ensure that Barcelona survives all the heat of the moment were all underrated until he left.