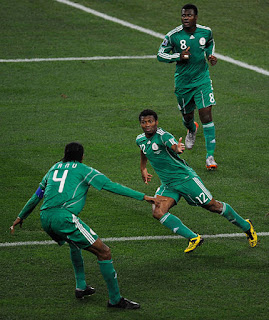 Cristiano Ronaldo and Lionel Messi may have made the UEFA Champions League competition their own by breaking old records and setting new ones at any giving opportunity, but Nigerians too have made appreciable impact in the competition that needs to be appreciated and good enough to be celebrated as well. 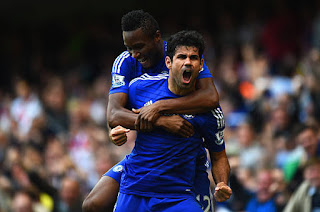 Their impact in Europe’s biggest football club competition have contributed largely to the popularity of the competition back home in Nigeria, Africa and the world at large in no small measure.

The contributions of Finidi George, Kanu Nwankwo to the Success of Ajax in 1995 was huge and Mikel Obi gave his all to ensure that Chelsea won the Champions League in 2012. Ironically that was the last time these Europe big clubs won the trophy who knows maybe they need another ‘Nigerian factor’ in their midst to win again.

Here is a compilation of the top records made byNigerians in the competition especially those ones, perhaps, that you never knew about or heard of before now. 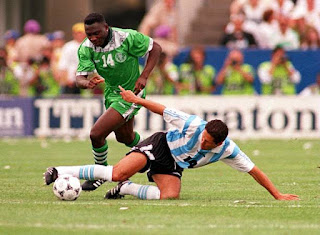 Did you know that Daniel Amokachi is the first Nigerian, the first African and the first player ever to score in the UEFA Champions League in 1992 when the changed format and name from Champions Cup to Champions League? He scored the only goal in the 17th minute for Club Brugge of Belgium on 25 November 1992, against CSKA Moscow ensuring three maximum points for his team.

Are you aware that the youngest Nigerian to ever feature in the UEFA Champions League is Celestine Babayaro. He featured for Anderlecht FC of Belgium against Steaua Bucuresti of Romania on the 23rd of November 1994 when he was 16 years and 87 days old. He only lasted 34th minutes as he was sent off by the centre referee, but he remains the youngest Nigerian player ever to have appeared in the competition.

Talking about appearances, the Legendary Kanu Nwankwo have the most appearance in the UEFA champions League competition. He played in the competition 60 times. He made his first appearance for Ajax Amsterdam as a teenager on the 2nd of November 1994 against Salzburg when he replaced Patrick Kluivert in the 57th minute . He achieved this feat playing for Ajax and Arsenal FC of England. He won the UEFA Champions League competition with Ajax, but wasn’t so lucky with Arsenal before he retired from the game.

Mikel Obi, came very close with 59 games while Obafemi came a distant third when it comes to appearance with 36 appearances playing for Inter Milan of Italy , Wolfsburg of Germany and Rubin Kazan.

Obafemi Martins is the Nigeria ‘Goal king’ in the UEFA Champions League.’ Omo Alhaja’ scored 10 ten times in 37 appearances across three clubs, Inter Milan, Wolfsburg and Rubin Kazan to beat other Nigerians to the honours. Victor Ikpeba, Yakubu Aiyegbeni, Julius Aghahowa and Emmanuel Emenike are all joint second behind Martins . 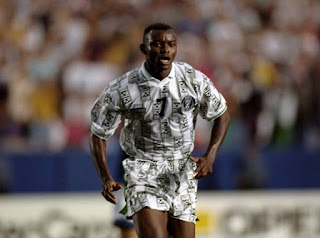 The biggest of them all is the duo of Kanu Nwankwo and Finidi George. They became the first set Nigerians to win the cup with Ajax in 1995 when the Almighty Milan was defeated by partick kluivert goal with Nwankwo Kanu and coincidentally the last time the Dutch giant won the competition.

And the last player to win it is Mikel Obi. Mikel won it with Chelsea FC in 2012 against Bayern Munich of Germany. Chelsea beat Munich through the lottery of penalties by 4-3 after a pulsating 1-1 full time draw.

Incidentally the trio of Kanu Nwankwo, Finidi Gerorge and Mikel Obi played in the finals of the Competition twice, but won it once and they are the only Nigerians that have played in the prestigious competition final, not once, but twice. Kanu Nwankwo and Finidi were part of the Ajax team that lost to Juventus in the 1996 finals as they failed to defend the title they won a year earlier. Ajax lost to Juventus through penalties under the tutelage of Louis Van Gaal while Mikel Obi was prominent in the Chelsea squad that lost to Manchester United in 2008 through penalties as well.

The draws of the 2019/20 round of 16 was made a few days, no Nigerian is remaining in the competition, but the likes of Victor Osimhen, Dennis Bonaventure, Steven odey, Paul Onuachu all played in the group stages. These young Eagles showed enough hunger and bite to follow the foot steps of past Nigeria stars in the competition and they may even surpass the records of the great Nigerians that have blessed the competition with their skills.