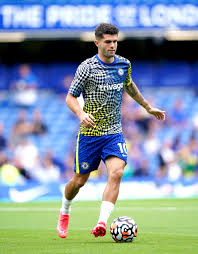 The head coach of Chelsea Football club says he is worried about the wellbeing of Christian Pulisic. Tuchel has urged the coach of the United States national team not to stress or overuse him during the international break.

According to Thomas Tuchel, Pulisic is still yet to recover fully and is still battling little pain from the injury that kept him out of action since August this year.

The US footballer was only allowed to return to action in the mid-week Champions League match against Malmo which Chelsea FC won by one goal to nil. Then on Chelsea’s Saturday draw with Burnley, he came into the game and barely managed to play for ten minutes, which isn’t satisfactory for a player of his caliber. However, Pulisic has left to be part of his country’s important qualifiers against Jamaica and Mexico.

Tuchel was asked in an interview if Pulisic is physically fit for the matches against Mexico and Jamaica, here is what he said: “The answer is if you look at the minutes like you said, the question is maybe answered. I hope that they don’t overuse him and are responsible enough.

“Christian still feels some pain. It is a matter of pain management. It’s not a matter of a re-injury or being still injured. It’s just still painful. He has tried hard.

“He desperately wants to come back. We needed him back. It was a good start for him in Malmo. Today he had 10 minutes [against Burnley]. We are a bit worried.

“Hopefully everybody, including himself, is responsible and doesn’t get carried away by emotions and by helping his country to win a super important match. Hopefully, it all goes well and the minutes will elevate him and he will come back stronger.”

This makes it the third time Christian Pulisic is down with injury ever since he joined Chelsea FC in 2019.

The partial return of Pulisic to action is a major win for the United States national team. They need his experience and leadership qualities to help the team qualify for the World Cup tournament. Neverending, they must put his physical wellbeing into consideration.

The United States national team is presently second in their World Cup qualifiers group, while they have group leaders, Mexico, ahead of them. They are closely followed by Canada with a difference of one point. Their match against Mexico is scheduled to be held on the 12th of November, 2021. After which they would travel to Jamaica on the 16th of November for their last qualifiers match this year.