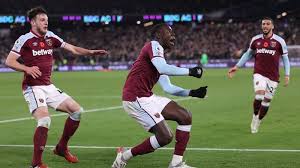 Westham ended Liverpool’s unbeaten run in all competition today and there were many things we learned from the rejuvenated Westham, under the tutelage of David Moyes. The truth remains Westham are a joy to watch at the moment. They are playing attacking flowing football that gives people who watch the expectations they deserve.

David Moyes has done incredibly well since he has been appointed as the manager of Westham. The way he has mentored these players under him within a short time; and the winning mentality he instills in all of them are worthy of emulation and beyond human expectations. Who would have expected before the season started that Westham would thrive as we have seen this season in recent weeks in all competition? Nobody!

With what we witnessed today, they deserved to claim all three points. They didn’t win by fluke or crook. Their performance was top-notch. Their defenders from the blast of whistle did a great job to keep inform Mohammed Salah at the bar. Declan Rice was doing the dirty job at the helm of the middle of the pitch. Michael Antonio was seen doing the major runs with the ball upfront and causing havoc to Liverpool’s defenders.

Alexander Arnold did well to restore parity with a sublime freekick before the stroke for Jurgen Klopp’s men, but the second 45 minutes was a different story entirely for the reds. Whatever David Moyes might have told his players before the second half kicked off worked perfectly well for him.

In a football season that has seen Westham defeat the likes of Tottenham Hotspur, Knocked out Manchester United and Manchester city in the Carabao cup round of 32 and round of 16 respectively, and ended Liverpool’s unbeaten run in all competition, one won’t think twice or stoop so low not to commend their efforts so far this season in all competition.

This is why we love the English premier league… We keep witnessing results that keep many football fanatics aghast after the final whistle is blown by the referee, as we have all seen today with the match between Westham and Liverpool.

Just like those days, Barcelona was well renowned with their “Tiki-taka” style of play; the hammers are following the same path.

Westham is third in the league, top of their group in Europe a league, quarter-finalist in the Carabao Cup, Still in the Fa cup, and very much alive in the title race.